Time well spent on the boat with Del. New computers that are made with lots of thought about how they are to be used. Solid state drives with all the buttons in all the right places. However, they are computers, but being Del ~ things had to be perfect ~ and finally they are. Two new GPS units and we are good to go. (Merry Christmas Nick and Becky from Mom & Dad) However, as we continued to work on the computers it was getting closer to Christmas and Mr. Belyea had to fly standby. Luckly the Gods were with us and he was able to catch a flight back to Salt Lake the day before Christmas. Christmas was quiet for us again this year and the boat parade on Lake Union was much smaller than last year. We are making final preparation for our awaited trip North into Canada, Princess Louisa and Chatterbox Falls. 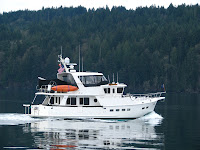 We leave just after Christmas with Ron & Bonny Zuckerman in Z-Worthy. She is a 48 foot Selene and they are well seasoned boaters. We will hook up with Wild Blue somewhere around Vancouver. First night is thru the locks and up to Everett. Lesson learned: tough to dock in the dark with heavy current and icy docks. Early morning departure to Bellingham with a slight drizzle, and arrive in Blaine Washington which is our final stop before leaving the United States. The weather has been kind to us and the vistas are beautiful. 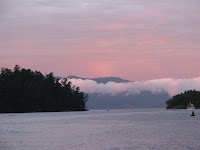 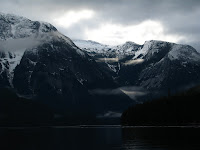 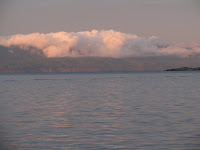 Early morning departure from Blaine and a evening arrival in Vancouver. One of our favorite cities. Cleared customs into Canada at Vancouver and we were a bit worried that they were going to keep Becky. The customs officials kept us at the customs dock for about 1 1/2 hours insisting that somewhere in the past we had been denied access into Canada. Z-Worthy waited patiently and eventually we headed into False Creek to find our Marina. Ron had made prior arrangements for us at Quayside Marina and the accomodations were perfect. We spent the next four days in Vancouver visiting Grandville Island, going to the movie (big deal for us) taking the train and the bus (bigger deal for us) going to the British Columbia University Museum of Anthropology to see the giant towering totems from the Haida, Oweekeno and other First Nations. 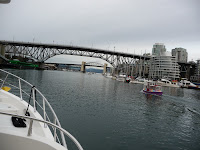 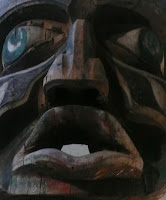 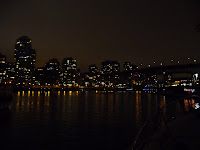 The leaders of "our trip north" Alex and Pat Benson in "Wild Blue" met us in Vancouver. Wild Blue had children to "dispose of" so we went our separate ways for a few days. We left Vancouver for nightly stops in Gibsons, Secret Cove and Garden Bay. Not much open in these small marinas so "eating" "dvd night with popcorn" "farkle" and "mexican train" become our nightly rituals. 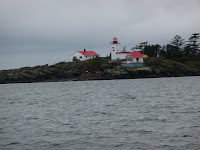 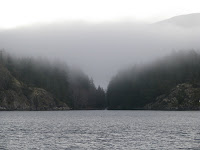 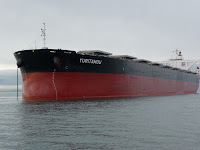 aybreak departure for Chatterbox Falls ~ our most northern point. Daybreak departure went smoothly. It's very misty with some rain and fog. As we enter the channel its amazing what you run into. An error in calculation and our determination not to be late makes our arrival at Malibu Rapids almost three hours prior to slack. We had to hang out in the channel. But what a place to hang out. There is snow on the mountains and the waterfalls are everywhere. The feeling is that this is one of the most remote places on earth but the scars on the mountains from all the logging remind you that civilization is just around the corner. 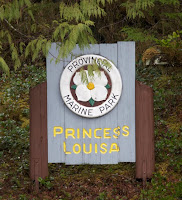 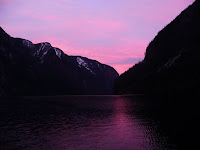 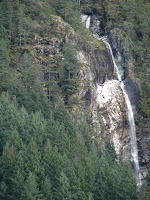 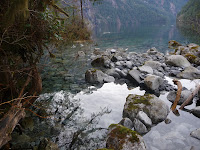 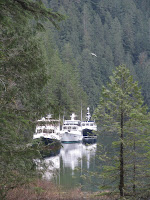 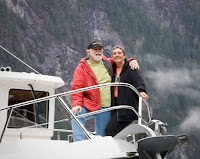 We traverse the rapids with a few butterflies in the tummy but our timing was perfect and Freyja did her job. We were very safe. We arrived at the end of the channel and the falls in the dark but could hear the water tumbling down the mountain. We would have to wait until morning to see what we could only hear. 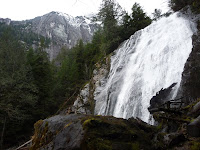 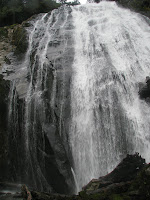 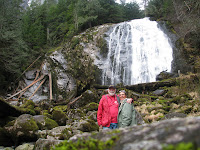 Two days at the Falls and it was time to start back. Crossing the rapids worked well and we were on our way. Our scheduled stop was Sunshine Harbor but the current was so strong that Wild Blue couldn't even get to the dock so we all opted for Garden Bay for our nightly stop. We met at 7am to discuss the fact that our weather window was deterioring quickly and the decision was made to "poke out" and see what it was like. Traveling with Wild Blue and Z-Worthy gave us the confidence to continue despite the six foot beam seas and 41 knot winds. There were several times when it was not very comfortable but Freyja never waivered and we pressed on thru the Strait of Georgia to Nanimo. 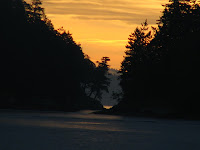 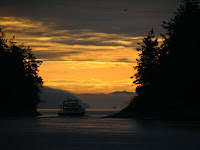 A couple of days in Nanimo and it was time to continue south. Early mornings in the Gulf Islands are awesome and the sunrise as we went thru Dodd Narrows can't be put into words. Ganges was our next stop and two more days of strong winds and rain and rain and wind. Another early departure to Friday Harbor to clear customs back into the United States. Beautiful weather which turned ugly again once we were in port. Wild Blue was on a time schedule and left early the next morning. The four of us stayed one more night, caught a movie and played backgammon. A very small weather window opened early in the morning and we hustled to get to Anacortes. It was a bumpy ride but we were glad we had made the decision to leave when we did. The winds were so strong by the time we reached Anacortes that we were glad we had help when arriving at the docks. I don't think we have ever had so many lines tied to our boat as we did over the next several days. It was hard to imagine what the seas were like when we were getting blown around in a protected harbor like we were. About 4pm the winds stopped and Freyja quit rocking and rolling. Left the next morning in blue sky and no wind. LaConnor for a lay over and Everett for two nights thru the locks and we are back to Seattle.
This was a very unique trip for us. Bitter sweet because Grandma Nora passed away while we were gone and we chose to continue the adventure and miss the funeral. She was okay with that decision and she would have told us to "press on". We made very special friends in Ron & Bonny and Pat & Alex. They are awesome people and their help, advise and skills were a welcome part of the adventure. Our trip was about 500 nautical miles and 80 traveling hours. We are proud of ourselves for following our dream, sucking it up and enjoying life. To Be Continued
2 comments:
Newer Posts Older Posts Home
Subscribe to: Posts (Atom)