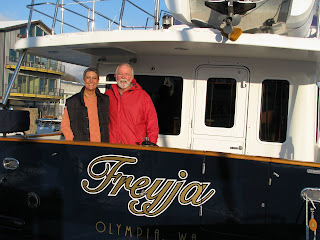 Life on the water is over for the time being. We arrived back in West Yellowstone on January 3rd where it was a balmy -27 and all was well-we thought. The hot tub was 120 degrees, we were out of propane and there was snow every where. Life is somewhat back to "normal" for now and we are counting the days before we head back to Freyja.
2 comments:
Newer Posts Home
Subscribe to: Posts (Atom)