During one day of "surfing" we came accross a post looking for "crew". We answered and soon found ourselves headed to Seattle to meet Captain Josh, Emily and the URSA Major. She is an older all wood red oak 65 foot headed to La 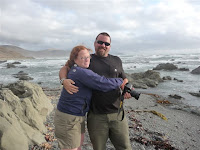 Paz Mexico and needed crew. We immediately signed on and left Seattle the beginning of October. Teal and Shiela rounded out the crew.We laid over in Eureka California for storm 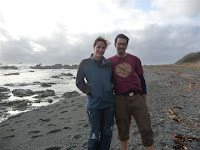 and San Diego for Hurricane Rick. But lots was learned and good friends were made. It was obvious that Nick and Becky were the "old folk" when it came to bar hopping in Eureka while we waited out the storm. However, I do think we held our own on the ping pong games. Josh, Emily, Teal and Shiela were so knowledgable about the whales, birds, fish and marine life - and it was a great learning experience to spend time with them. Not to mention what we learned crusing. In San Diego Teal and Shiela left and Bill joined us now 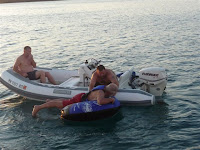 making us a crew of 5. Having traveled on the URSA before he was knowledgeable about how things worked and was a asset to the group. Arriving in Mexico was unbelievable. The water temp was 87 degrees. Snorkeling was definitely a highlight as the fish were bright, beautiful and so close but the boys enjoyed the dingy ride and things got a bit crazy. It is certainly a different lifestyle in Mexico with the warm temperature both in and out of the water. 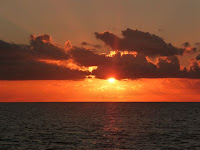 Our last morning in La Paz. We sat quietly on the back deck of the URSA and as the sun rose with spectacular color and wisps of clouds drifted by - the "Nick and Becky Show" made the determination that Mexico is our destination. It will not happen this year but hopefully next Thanksgiving we will be on the
back deck of Freyja viewing that same type of sunrise.
No comments:
Newer Posts Older Posts Home
Subscribe to: Posts (Atom)